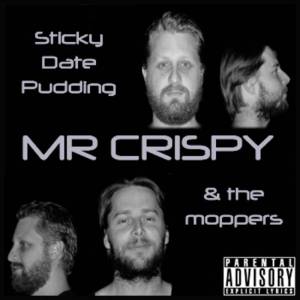 Sticky Date Pudding is Mr Crispy’s third full album, its deeply meaningful title demonstrating one of the reasons why Mr Crispy do not write lyrics.

Sticky Date Pudding is another album of instrumental rock, broadly speaking – The Guru II is pretty much metal, Jeru II might be world music, and there’s a few laid back ballads, like Creme Caramel and Tiramasu (if you can call a song without lyrics a ballad, and I’m not entirely sure that you can). I believe they were going for a dessert inspired theme with this album’s track titles but didn’t entirely carry it through.

From an outsider’s perspective watching this album be written, these songs seem to be mostly inspired by “wow, that’s an awesome chord progression” but you never know, there could be some deeper meaning to it all. Probably not though.

You can stream and download the album at Bandcamp.